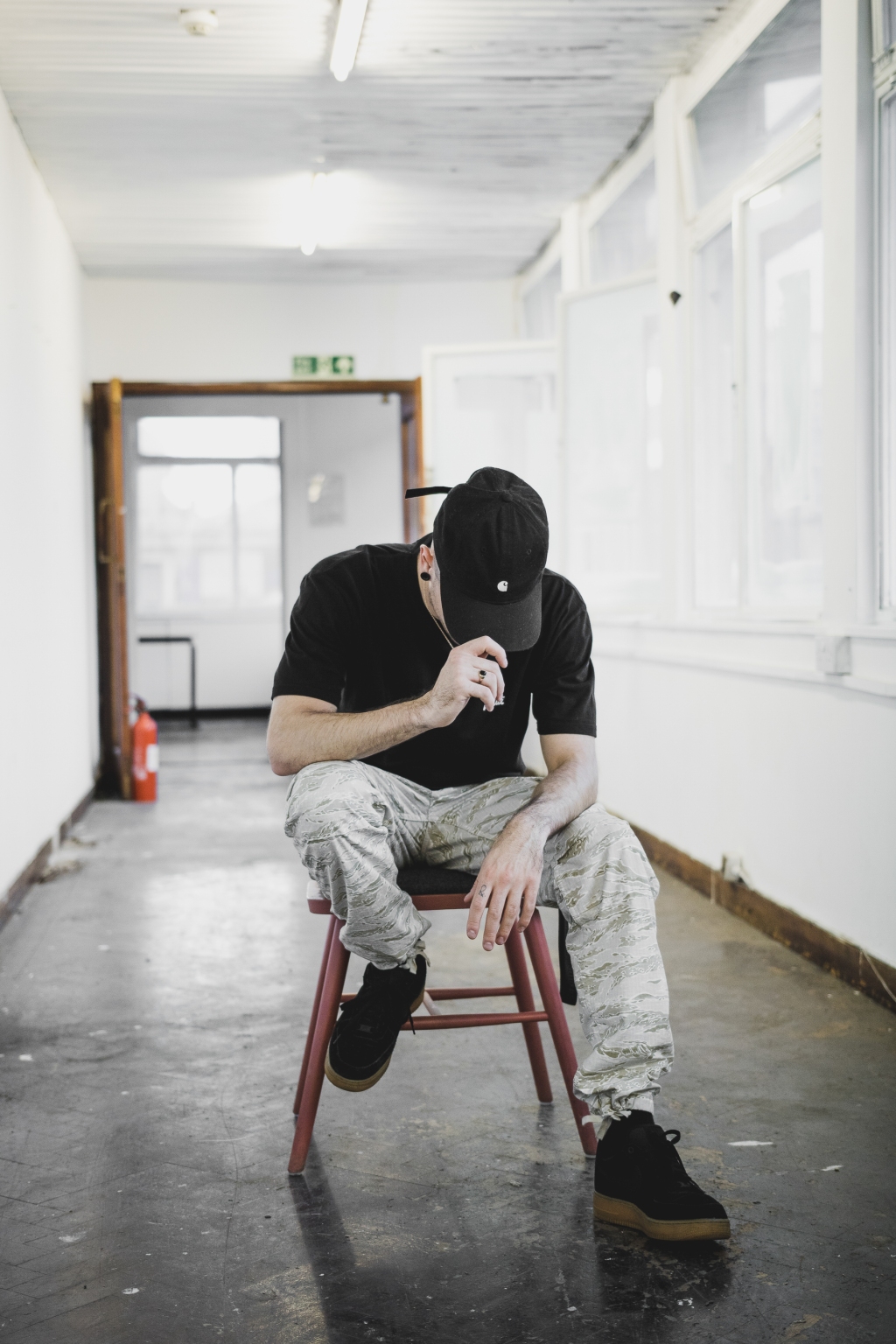 Here’s the thing. When you’re a ‘natured’ creative wrapped within the confines of a ‘nurtured’ corporate sphere, it can be extremely overwhelming. Though the law of the land dictates money is a necessity to afford basic human requirements (food/water/shelter), the conscience of nature will fight against the restraints of nurture. It wants to be free. It’s not something you can easily suppress. However, whereas the idealist may succumb to their innate inclinations, the realist strives to find balance betwixt the discord that rages within. This week, I introduce a man  determined not to give in.

For Graphic Designer Benny, owner of UGLYBENNYCO, though he “was always good at art in school”, he confesses he was never “championed” for it. Instead, he was led down the more ‘traditional’ path of philosophy, politics, economics and ethics. Though he traversed this road at the behest of others, it was an acquaintance at school which made him switch lanes. “I knew someone who did Graphic Design for Defected Records in London” he begins. “He was the year above me and he was unreal – so I thought, you know what, I’m gonna try it out. I went to college and loved it!”. Admittedly, at the start of college, he had no intention to progress to university – but that changed soon enough. “I wasn’t gonna go uni. Then when I got to the stage I could apply for uni, I thought f*ck it, I’m gonna try it out”. This decision to hone his skills even further allowed him leave his home in Milton Keynes and travel north to enrol at Manchester Metropolitan’s School of Art, where he graduated in 2015.

Intrigued by the company name, I simply asked: “Why Ugly Benny?” Pausing before emitting a mischievous chuckle evocative of an individual caught in an act punishable by a stern scolding, he revealed the origin. “My friend Denford at uni – me and him were arguin’ on snapchat givin’ each other sh*t back n forth as you do, then he was like you know what? YOU’RE F*CKIN’ UGLY! – I was like, ‘Ugly Benny‘ – that’s got a ring to it”. I couldn’t help but laugh myself. Denford sounds like my friend from uni, Matty. They would get along. Being an industrious man, Benny flipped this jest to his advantage. “My final major project at uni, I did this T-shirt thing called UGLYBENNYCO and it kind of stuck. But that’s me now – that’s kinda like my personality. It’s my company name which I started in October 2016.”

UGLYBENNYCO is my company. It’s me. I can’t let myself down.

For Benny, the key to not give in to the restraints of nurture lies in his ability to find the medium that befits him. “It’s tough, but if you care about what you’re doin’ enough, you’ll find enough balance. There’s enough hours in the day”. And I agree. Being a fellow creative, I shared with him that I recently fled the corporate chains wherein the last month, I decided to go all in dedicating back to back 17-20 hour days gathering and creating content, networking and building my brand’s image. I’ve been surviving on will and belief it will pay off. But the human body can only sustain so much. “Like you said before” he relays, “if you have to sleep 3 hours, then you sleep 3 hours. If you’re workin’ from 8:30am-5:30pm, you still have from 6pm until 3am”. In agreement that the human body can only take so much, he asserts: “obviously you can’t sustain that all the time because you have to rest up”. And there lies the balance. Having the knowledge to know your limits. “I think what’s important to me is knowin’ when to call it a day. That’s why on the weekend I spend time with my girlfriend and my mates”. Again, it’s important to find the medium that befits you. Besides spending quality time with those he holds dear, he also indulges in excursions that befit his profession. “I went to the Withworth Gallery recently on my own just after work. They’ve done a huge renovation. They were doin’ some really interestin’ stuff on Islamic materials – like carpets and rugs and stuff. It was nice to see some textiles in there”. But, being a self-confessed “minimalist”, he conveyed he “probably enjoyed the buildin’/architecture more than the collection”. You’ll see why in time.

Since starting the company, the biggest challenge he’s faced has been consistency. “If I’m being honest, I don’t put out as much as I want to – but that’s because of my full time job. That’s 8 hours a day I’m not doing anythin’, but I make the most of my time”. And I agree. That was the main reason I walked away. As I’ve already mentioned, it’s important to find the medium between one’s conscience of nature and the restraints of nurture. But what happens when the restraints of nurture stifle one’s creativity to the point you feel you can no longer breathe? Though Benny’s ‘corporate role’ subtracts 8 valuable hours from his own ideals, being a Marketing Coordinator that handles Marketing/Graphic Design does grant him transferrable traits he adopts to the benefit of his company.

He’s diligent. He’s hardworking. He has the utmost belief in his skillset. But most of all, he’s determined. “A lot of things I’ve done I’ve given up”, he relays in a contemplative tone. “But this, I was like I’m not gonna give up on this”. And you can’t. To reference the fictional Marlo Stanfield: “my name is my name”. It’s your business. It’s your reputation. In short – it’s you. That understanding of the reputability of one’s name is why for him, even though ‘nurture’ doesn’t afford him the ability to release content as often as he’d like, he understands “it’s mostly about not puttin’ out somethin’ just for the sake of it”. That just won’t do. You do yourself a disservice. You do your image a disservice. And ultimately, you do your brand a disservice. For him, when he releases, he ensures “that it’s somethin’ that is relevant to yourself and the brand and people are gonna engage with it”.

I like makin’ things perfect and makin’ sure that’s exactly how I want it to be.

According to him, the best aspect of GD is ensuring “everythin’ is as stripped back as it can possibly be and as clean as I can possibly make it”. This trait ties into his aforementioned “minimalist” disposition. By nature, he’s a perfectionist. “I’m fairly OCD” he admits. That being said, some time ago, he recognised perfection was his hamartia. “I’d sit for hours and things were not getting done. Then I saw someone put somethin’ that said: being a perfectionist is gettin’ nothin’ done”. And I somewhat agree. There’s beauty in seeking perfection. It’s admirable. It’s commendable. But, it’s also taxing on the psyche. The search for perfection may make the most skilled individual question their worth. “Is this good enough”? may begin to swirl to the fore like a mid morning mist. “I have a lot of self-doubt, but I think all of us do that” he reveals in a moment of open sincerity. And again, I agree. For individuals such as Benny, when determination matches desire, you’re on the cusp of  the pyramid of progression. You just need faith to see you through.

Being a free-lancer for the past two years means he now has a better understanding of his time management skills. “Now I give myself a time limit” he confides. That isn’t to say the product will be shared instantly – it’s a way for him to be more proactive with the limited free time he has due to his 9-5. The “excitin’, but stressful” creative space he’s in currently consists of personal creations amidst commissioned pieces. When pressed to relay the turnaround time for commissioned work he responded: “It depends on the project and if they have a brief. A lot of people come to me and say do what you wanna do which is really nice as you get the reigns of it, but it can take a little longer as you’re doin’ it your way”. Perfection.

Though he thoroughly enjoys commissioned pieces, he revealed that he’s been moving away from digital art to journey down a more creative route. “I wanna start becomin’ more of a creative director. I’ll still do commissioned work, but I wanna start doin’ installations and exhibitions like Daniel Arsham and KAWS. They are incredible artists that create somethin’ in real life that can make a difference and a change”. He also name drops Mancunian artist Virginia Ben  (who paints trainers and does creates canvas art) as an individual he respects due to the quality of the work he produces. “His work is just incredible”. Amidst the numerous creatives currently operating in the city which he believes “is inspirin'”, he’s carved his own lane. “There’s not anybody who I think is doin’ exactly what I’m doin'”, he conveys. And I agree. That isn’t a wanton statement of unchecked bravado. He’s created his usp and he’s delivering quality product. We’re all doing something amazing in order to create platforms for the culture. “Everybody is on job trying to do somethin’ – create somethin’ which is great to see”.

If things don’t come to fruition, don’t be discouraged, carry on goin’.

To date, one of his biggest achievements was being granted the opportunity to meet Roy Woods backstage at his Gorilla gig in June of this year where he presented him with some pieces he created. “I was listenin’ to Roy Woods a lot at the time. Couple of months down the line, his management team approached me and asked if I can do some work for them which fell through unfortunately”. He states the original photo was taken by Toronto based photographer, The 97 which he then took and added his creative flair. And this was borne from the sheer love for his chosen art, or in his own words: “it’s my passion”. Though the original project fell through, he didn’t allow that to deter him. He perseveres to this day. “You get a lot of knockbacks. A lot of opportunities which don’t necessarily come to fruition, but don’t get discouraged by that. That’s one of the things I’ve learned over the years”. Though the original project fell through, what he created was heralded as a brilliant body of work. “The response from the Roy Woods piece was incredible”, he affirms. “Seeing what people were sayin’ about that was good”.

Over the next 5 years, he aims to venture into exhibitions/installations to further his range. “I don’t just want wanna do this as a graphic design thing. It will be an exhibition of my artwork”, he insists. Currently, he’s conducting work behind the scenes to make this vision a reality. I shan’t say much here. His advice to emerging creatives: “Just because you’re forced into somethin’ academic like I was, it doesn’t mean you need to do that. You can choose somethin’ creative and there’s ways to make money from that and be successful from it”. And I agree. To hearken back to the original notion that the ‘conscience of nature will fight against the restraints of nurture’, don’t resist. Like Benny, once you choose your path, find the medium. There may be days you find it difficult. There can be times things seem insurmountable. But there will be days when you look at what you have achieved so far and think to yourself: “I have to continue”.

iThere are no comments

Begin typing your search above and press return to search. Press Esc to cancel.