I’m going to be honest from the jump. Even as I type, I can only remember up to a certain point of the night. Classic Demz. But that’s a good sign. Right? That’s what makes me wade through the river of hangovers that usually follow my ‘nocturnal excursions’. That’s what I choose to believe. Funnily enough, though many a spirit and rum was consumed and I didn’t get home until ***am the following day, I felt surprisingly okay. The post gig party. The venue that followed the post gig party. What. A. Night. To divulge would be to incriminate – so I shan’t. Let your imagination run wild in the field of possibilities – I still wouldn’t pass the baton of information. Oh, and I lost my phone. I lost my funkin’ phone! Anyhow I’m getting ahead of myself. Let’s rewind and tell you about an incredible night of talent. Oh and before I begin, my reviews won’t follow the usual ‘academic’ route I traverse when doing feature write ups. No prep. No plan. Just literally writing the words as they come to mind. I don’t wanna write a review based on structure. Just free verse and recollect as best you can from memory. So, let’s get it. From the jump.

Already confirming with my cuz (Cee) from earlier in the week that I’d show face at the ONE6WAVE gig (he was booked to dj ‘longside the incredible House and Tech duo Toucanplay and 6WAVE’s DGT), I left in time so I would arrive ahead of soundcheck. In keepin’ with my honest approach to this review, I’ll admit, my initial intention was to simply attend and enjoy the show from a spectator’s standpoint. More on that later. Now, Indigo is one of those hard to find venues. Kind of like 12 Grimmauld Place. You only know it’s there, if you know it’s there. It’s on the Withington side of Wilmslow Road. Literally a door on the main road that leads downstairs into a basement. For anyone who knows me, they can confirm that I cannot stand the heat. I really get annoyed when it’s too hot. So the fact I met Cee at the door to a dungeon on a very humid day, I already had misgivings. But, I’m sooo glad the 79yr old man within didn’t turn tail and return home to my bible and a litre bottle of Volvic like I do every Friday. Wait, I already somewhat admitted an achilles of spirits and rum. Never mind.

Now, first thing you need to know about Indigo. It’s a shubz. There’s no two ways about it. As you go down the metal stairs into the pit of sin, you’re met with an almighty rush of heat. No windows. No air con. These times there were only about 10 people tops in there helpin’ to set up. In my head I was thinkin’, “how am I gonna survive in my Zara skinny’s when this place fills up?” I  actually debated circlin’ back to throw on some shorts, but thought nah – gotta soldier this come what may! Also, It isn’t the biggest venue. I’d say the capacity is like 100/150 max. But, I’m better with words than numbers – so don’t quote me on that. Though it had the classic hallmarks of a shubz (a paint job here, a new toilet there), that isn’t an assault on the venue, the promoters, or management. Truth be told. I liked the aesthetic. Kinda reminded me of the youth club days when underground (in this case literally underground) venues were clearly over capacity, but no one cared. We were all there for the love of music – for the love of the culture. It wreaked of authenticity. Leave the Febreze on the shelf. This was the first reason I was glad I stayed. 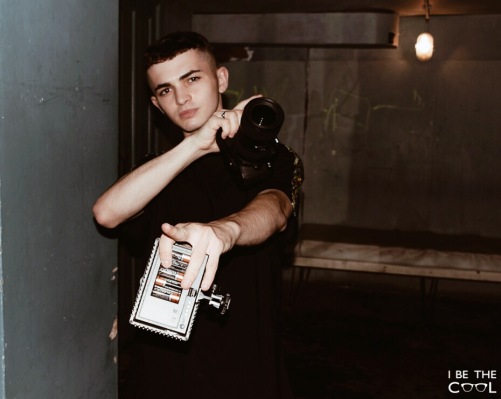 Soundcheck finished (the event still hadn’t started at this point), I noticed a yung’en in the corner geared out with a Canon 750d and a 35mm Sigma lens attached, tripod, LED light AND he was still reaching in the bag of tricks for more product. That’s when it hit me. Why did I leave my gear at home? I made a swift call to my younger bro and told him I’ll grease him with a note to pass through with my equipment. Now whilst waiting for him to turn up, I approached the yung’en and asked him who he was, how long has he been doin’ this etc. Turns out the kid is a prodigy. He’s been on job for a minute and has already amassed a serious followin’ with some incredible contacts in the social media industry. All this and he’s not 18 for another month. His name – Liam Heeley. Check him out. In the words of Push, he’s putting numbers on the board! You were right Tilly, everything does happen within reason. Though selfish, this was the second reason I’m glad I stayed. I was meant to meet this young virtuoso.

Push it forward a touch, my brother came through with the bag and true to my word I greased him with a change. Probably put that towards something swaggy. At this point, the venue was fillin’ nicely. People were purchasing drinks (or brought some in their equipment bags like the old days), Cee ‘n’ Toucanplay were going b2b warming the crowd, ONE6WAVE T’s were everywhere. The energy was buildin’. The vibe was infectious. After doing one round b2b with Liam taking pics, I ‘found’ myself at the bar ordering a pint of coke (work it out) and returned to the dj area. By time I picked up my drink (it was noticeably emptier than when I had left it and it tasted different), it was time to start. 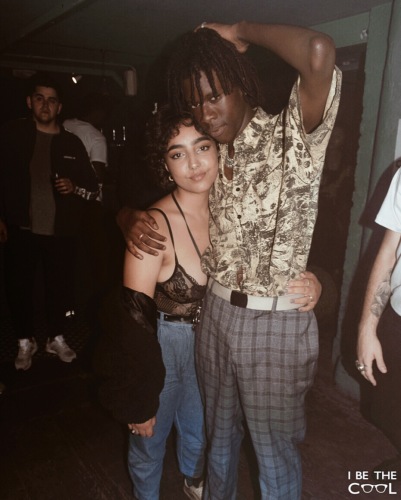 Being my first introduction to the 6WAVE collective, I came with open senses. I had no inclination what to expect. When the host for the evening, (Cal Mac) took the stage in ‘Simon Cowell swag’, it hit me. These boys do things differently. He brought that raw bravado needed in a venue of this calibre. Throughout the evenin’, he controlled the  crowd with sheer confidence. A true master of ceremonies. The first act presented was ProjectKillIsaiah – a guest who had the privilege to shell down ‘longside 6WAVE. Aesthetically, he’s a cross between Migos with the sauce of Netflix’s depiction of the infamous Cali Cartel’s Pacho Herrera. Swag level = kingpin. Here he is ^. I actually kept shoutin’ ‘Cali Cartel‘. But it ain’t all visual. The boy can rap! He was spittin’ rhymes with fearlessness evocative of a hungry go getter that’s out to shine no matter the hype. He’s steadfast in his own lane comin’ with da fire. He definitely brought that ‘hunned per cent’ raw. A great opener to the show.

Next up was Tom and Joe, the guitar and singer duo that go by Friendly Whiskey. Again, those that know me can attest that I can go from gangsta rap to ballads – from grime to rock. I have an eclectic taste when it comes to music. I have an eclectic taste when it comes to most things when I think about it. So for me, when they switched the vibe from PKI’s raw product, I was still in my element. I’ve always been fascinated/intrigued… phuck it, a tad jealous of artists who can play a guitar. And, a bit miffed I never learned to control this deep voice of mine to be able to sing. So when they took over, I couldn’t help but smile. There’s something brilliant in the simplicity of an acoustic set. No need for gimmicks, no need for anything that distracts the audience from what they are witnessing. Joe’s vocals, coupled with Tom’s laid back strummin’ puts you in a melancholic state of bliss. They came with it!

JT Kobie has a commanding voice that is accentuated by his (what I’d call) a spoken word delivery. There’s a venomous tone in the way he enunciates his words that forces the listener to pay attention. At a moment’s notice, he switches his flow from laid back to a feverish pitch, all whilst maintain an air of control. He’s the opposite of mumble rap. The best rappers in my opinion are first and foremost poets. To be a rapper, one must have a certain level of command in language. To be a rapper, one must have an innate knowledge of flows and have the ability to keep the audience engaged. This guy has this and does this in abundance. Gang Gang!

If there’s one word I can use to describe Gilly, it’s wavy. But seeing as it’s a review, I’ll have to wax lyrical for the next paragraph. ‘Man a graft in silence, don’t watch me I got the sauce I’m grindin’, Man a graft in silence, chasin’ dough gotta put in that mileage’. Taken from his track Silence (produced by KidOcean) released earlier this year, I’ve still got this refrain stuck in my head. Similar to FW, the best ones are found in the simplicity. What I enjoyed most about Gilly’s set was the crowd reaction. It was a crowd familiar with the rapper’s material. The energy was reciprocal. He played off the crowd, they played off him. Spittin’ over wavy ‘kush’ type instrumentals, it was definitely surf time at this point. The wave was real! 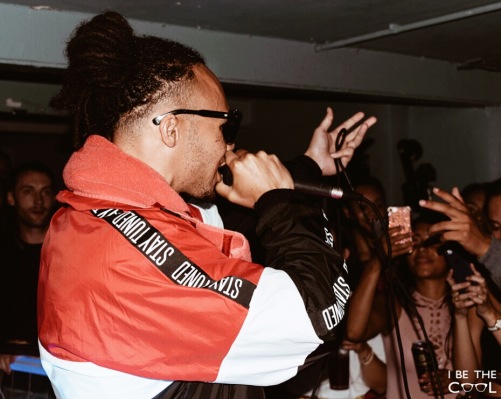 Now, for the man of the hour. D_Wayne. Closing out the show, he had big acts to follow. And he did not disappoint. He’s a rapper’s rapper. He spits effortlessly with that ‘golden era’ flow. Smooth and reserved. He let’s his lyrics go to work for him. If he carries on this way, the cheque’s comin’. No doubt! Similar to Gilly, he had the crowd in his palm. And they ate every word! I enjoy gigs where there’s an organic union between the acts and the crowd. There’s beauty in the marriage of artists and fans. They gave him their heart, he gave them his soul.

So yeah. Brilliant first gig that I had the privilege of reviewing (though I didn’t intend on working initially!). These guys showed love, hospitality and a level of courtesy that I shan’t forget. Great night with amazing people. ONE6WAVE to the world!

Begin typing your search above and press return to search. Press Esc to cancel.